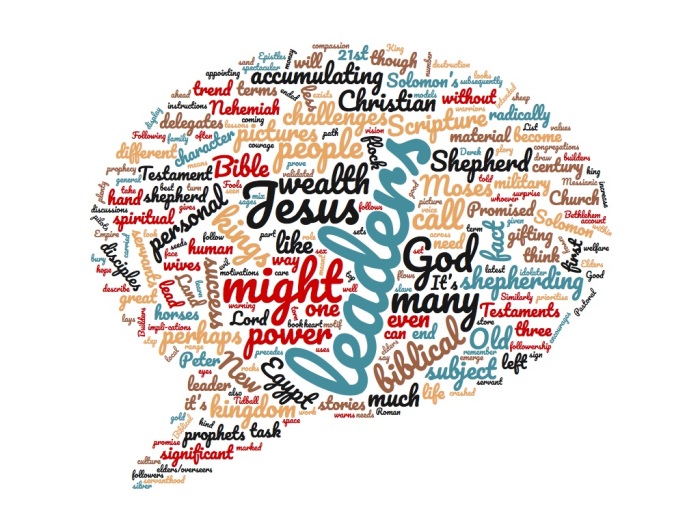 The past few decades have seen a significant increase in interest in the subject of leadership, both generally and within the Church. So much so that it’s tempting to paraphrase Ecclesiastes: ‘Of the making of books (and articles) on leadership, there is no end!’

The range of resources available means that Christians face a challenge in knowing how to navigate the subject. On the one hand, we can become so infatuated with the most recent trend in management or entrepreneurship that we end up unwittingly relegating the Bible to the sidelines, while on the other hand, we might bury our heads in the sand with regard to the challenges of 21st century leadership or the wisdom that might be gleaned from some of the best leadership thinkers. In fact, we might prefer to ignore the subject altogether, perhaps even dismiss it as unspiritual!

It’s the first of those temptations – ignoring the voice of Scripture – that I hope to address in this article, suggesting three biblical themes that might provide a framework for fruitful reflection on leadership.

1 – The Bible and leaders

The importance of human leaders is implied by the array of leaders that God uses across the pages of both Old and New Testaments. Considerable space is given to many of their stories: from Joseph, in ‘secular’ leadership in Egypt, through Moses and the Exodus, Joshua in the Promised Land, judges, like Deborah or Gideon, kings like David or Solomon, governors like Nehemiah, all the way through to the Lord Jesus himself and those who followed him.

While we need to be careful not to treat some parts of Scripture as little more than leadership handbooks from which we can glean ‘leadership principles’, many of the stories have a great deal to teach us about the challenges and responsibilities of spiritual leadership. We also need to recognise that few of the biblical leaders left legacies of unmitigated success. Moses failed to make it to the Promised Land. Samson’s story was a confusing mix of faith and recklessness. Many of the kings ‘did not do what was right in the eyes of the Lord’.

Scripture’s portrayal of these leaders is so honest about their flaws that, even if it’s too much to say that human leadership is a necessary evil, we might be tempted to think of it as a dangerous necessity!

2 – The call to character

Scripture cautions about the traps of leadership. In the Old Testament Deuteronomy 17 warns the king against accumulating horses (a sign of military power), accumulating wives (perhaps as a way of cementing political alliances, but a potential gateway to idolatry), and accumulating silver and gold (material wealth). By any other reckoning, these three things would probably have been markers of success in the ancient world: who wouldn’t admire a leader with great military power, international influence, and personal wealth?

In fact, Israel had one such leader: Solomon. Solomon’s wealth set him at the top of the ‘Rich List’; he had 12000 horsemen (along with horses from Egypt); in his household were 700 wives and 300 concubines. But the trappings of apparent success carried the seeds of the destruction of Solomon’s leadership. He ended his life an idolater and the kingdom was subsequently torn from his family. How many Christian leaders have crashed their leadership on the rocks of money, sex, and power?

It’s no surprise that the New Testament sets so much store on the kind of people who were to lead local congregations. The instructions for appointing elders/overseers in the Pastoral Epistles prioritise personal character over spectacular gifting (though gifting is part of the picture). Similarly Peter (1 Peter 5) challenges the heart motivations of elders, warning them that spiritual leadership is not intended as a path to wealth or personal power.

Derek Tidball, in his book Builders and Fools, encourages Christian leaders to think about their role less in terms of the latest leadership trend and more in terms of some of the pictures the Bible itself gives to describe ministerial leadership. When we do this, there is plenty of material!

Among the pictures from which we might draw, there are kings and warriors, prophets and sages, builders and pilots, and there are shepherds and servants.

‘Shepherd’ is perhaps the dominant metaphor for leadership in both Old and New Testaments. In the OT, God (already the Shepherd of his people) delegates the task of shepherding to kings and other leaders. Sadly, they often prove to be unfaithful and are denounced by the prophets who promise that God himself will step in. Messianic prophecy looks ahead to a coming King who will emerge from Bethlehem and shepherd his people. Jesus is the Good Shepherd who lays down his life for the welfare of his sheep, and in turn he delegates the task of shepherding his flock to his followers. Elders are told to ‘shepherd’ the flock.

If 21st century Church leadership is to be biblical, it needs to take proper account of the implications of the shepherding motif, with its call for leaders who are marked by both compassion and courage.

Finally, leaders are servants. The term ‘servant leadership’ has become familiar in general discussions of leadership, but it was Jesus who challenged his disciples to look less at the powerful models of contemporary leadership on display in the Roman Empire, and learn the lessons of servanthood. In contrast to the domineering styles of the culture around them, Jesus’ disciples had to understand that the radically different values of the kingdom of God included a radically different vision of what it meant to be number one: whoever would be first would have to be the slave of all.

(This is a slightly edited version of an article written for Insight – the magazine of the Association of Baptist Churches in Ireland – part of a special section the magazine is running on leadership.)